The Solomon Heights of Altona

So I was looking at Google Maps, as you do, and came across something that looks a lot like a zombie subdivision... 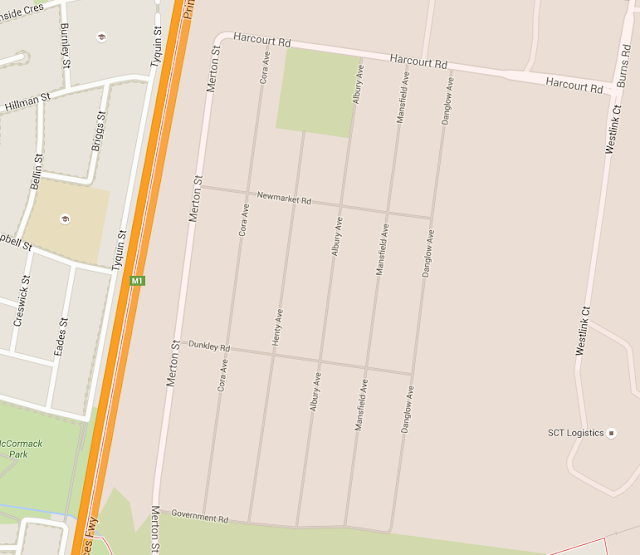 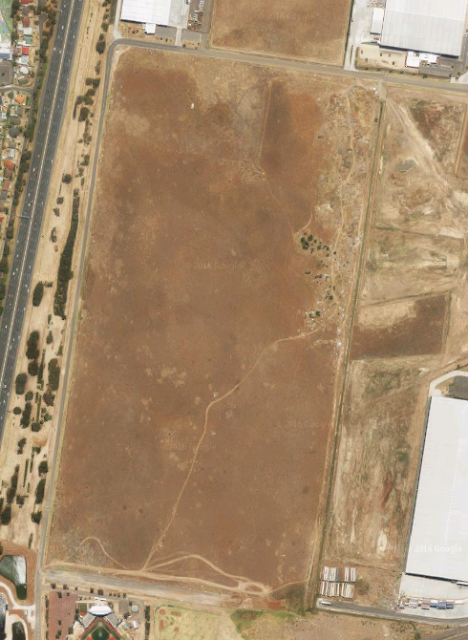 There are a few real estate listings (see here [just look at that sales spiel] and here [$29,000?!]) which suggest the site is unserviced but totally has potential - which it definitely doesn't, because I just looked it up, and it's in the 'Altona Special Industrial Area' (according to a Schedule 4 to the Special Use zone). The following is noted:

Use of unserviced subdivision, Merton Street

Land bounded by Merton Street , Harcourt Road, Danglow Avenue and Government Road, must not be used or developed for any purpose other than agriculture unless the land: 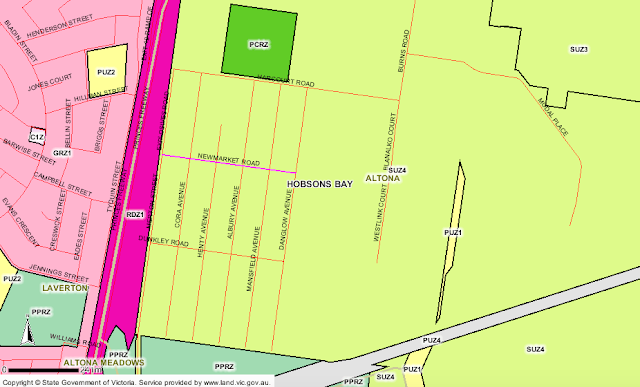 So basically it seems like only a big development can happen (and an industrial one at that). Another limitation is that structures built on this land cannot cover more than 60% of the site, so if someone wants to use the land efficiently, they should probably 1. befriend all the landholders and buy the surrounding lots and 2. think of a business that isn't labour-intensive: there are also limits on employee density because of the site's proximity to petrochemical facilities. I think it falls under the density control 'PD10' which means a minimum of 52 m2 for each employee on the site - I don't know if that's per square meter of building, or the actual site including undeveloped parts - but if it's the former that's only 230 full-time employees. I don't do business (or maths) so I could be wrong, but that's not very many people

Also, weird thing: if you can't tell from the image above (and the ones below), there is a piece of land on Harcourt Road which was zoned PPRZ/public land but was actually privately owned, which recently necessitated its rezoning to SUZ4/special use. It is now for sale, and is big enough to be developed (if whoever buys it is happy to pay for services/infrastructure to be connected). 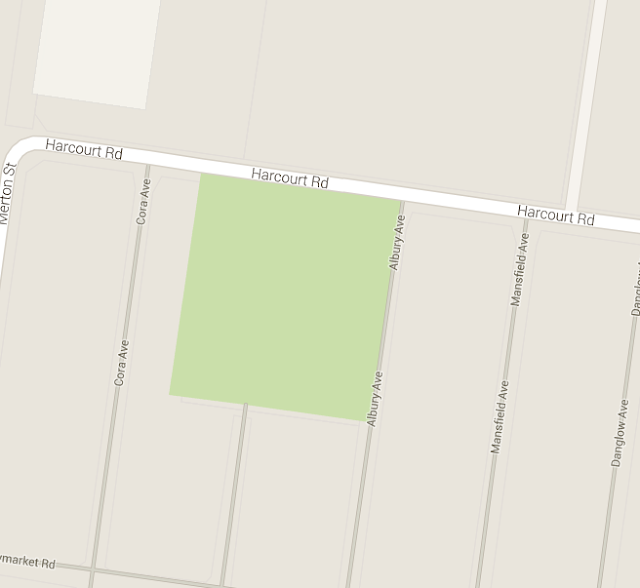 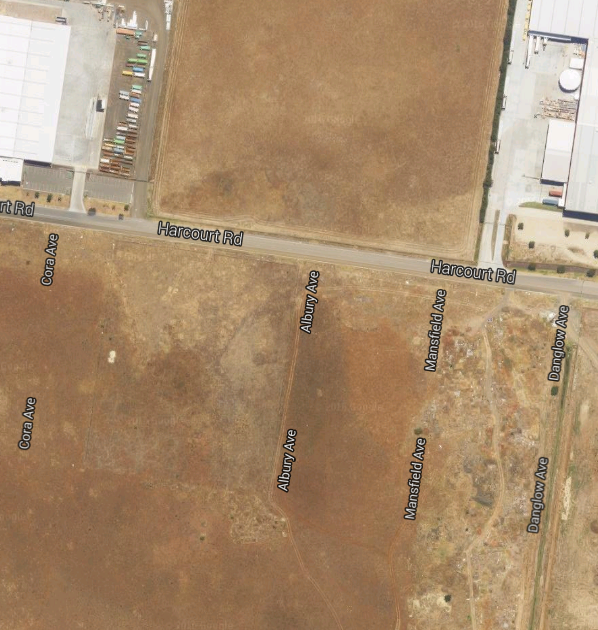 A quick search also brings up this blog, which refers to the possibility of land banking - someone in the comments clarifies with a completely different theory:

Anonymous said...
In reference to the particular land where Merton st/Harcourt rd and the baseball stadium is: the land is cheap and affordable, however there are major gas pipelines running below the surface of these blocks of land, and due to the nature of them, any building is not allowed.
Monday, March 05, 2012 11:35:00 PM

This is potentially true - there is an ethane pipeline that connects a tank farm/facility near Western Port Bay with the Qenos plant on Kororoit Creek Rd. I'm not completely sure as to whether it passes through the site but there isn't really much to go on except this image I found (I tried to look for more 'evidence' but got sucked into this special 'edition' of The Age* - if you look closely enough at one of the ads for the Olympic brand, you can see the building I live in): 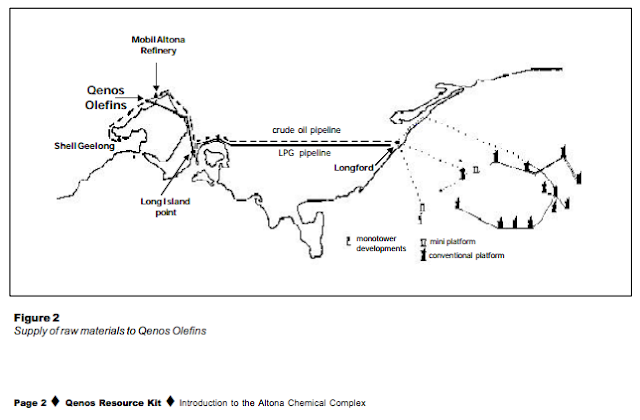 And then I found this very comprehensive history which explains everything in great detail (and turns out there's a 'proper' name for the area - Burns Road Industrial Estate) and which is actually taken from this document. You can read it so I won't repeat it here. There's a pretty active group of landholders who want something done, which is nice. A sternly-worded letter on their website from Hobsons Bay City Council alludes to an 'engagement process' which has 'proved successful in the establishment of a land owners group in a neighbouring municipality for an estate affected by issues similar to the Burns Road Industrial Estate' - I wonder if this is Solomon Heights? They also mention 'orphan lots' where ownership cannot be established, which is interesting (and of course would pose an issue with the accrual of lots to make a single parcel that is large enough to develop), and again I wonder if Solomon Heights has any of those.

The parallels with Solomon Heights don't stop there either, according to this document:

This land is currently owned by the Department of Sustainability and Environment and zoned SUZ4 however it is occupied by a grasslands reserve. The grasslands reserve is the result of negotiations to create a reserve in 2002 between the previous owner, the former Department of Natural Resources and Energy (DNRE), and the Council following land swap/ transfer negotiations regarding land at 870 Kororoit Creek Road, Altona North. The land swap/ transfer was brokered to ensure the protection of high quality native vegetation. Confirmation that the lot accorded with DNRE’s negotiations for the grassland reserve was received in and it is therefore appropriate to rezone the land to reflect the use for which it has been reserved.


Who would've thought the few remnant shreds of native grassland would pose an issue.

So, long story short, Solomon Heights isn't alone in development limbo, and Hobsons Bay CC seems just as ineffective as Brimbank in brokering any kind of a solution. And the Altona site probably has way more problems than Solomon Heights ever will because of the whole petrochemical/density thing. Which is good for me, because I like planning mysteries.


*And just for fun - I got curious about whatever 'Slough Estates' is, because The Age had quite a few ads for it, so if you're curious too, read this and this and this (ctrl + f 'Altona'). It continues to live on in the form of Slough Rd and its surrounds. And it even has it's very own Solomon Heights-esque street truncation